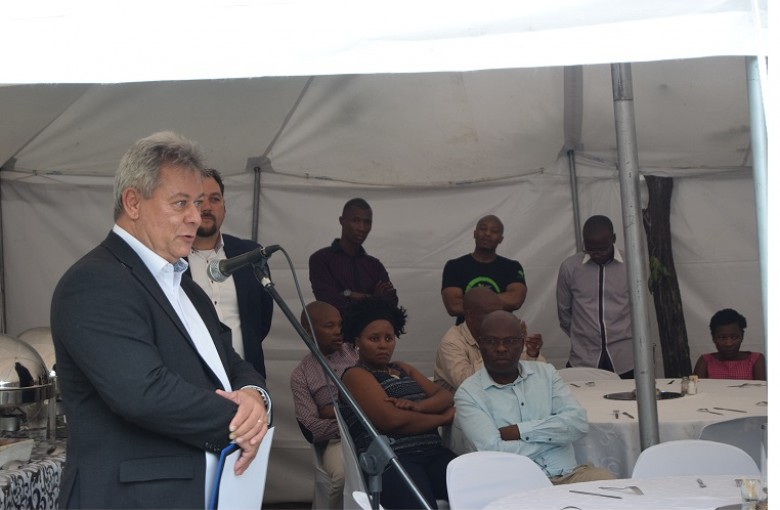 Robert Krissier, Country Director South Africa, Lesotho and Swaziland visited Lesotho on Friday 30th November 2017 on a one day visit for a function to commemorate the achievements of PISA in 2017, one and a half year of PISA inception .

Krissier’s first shot on the mark was the remarkable footprint which PISA has created for itself in the country by establishment of ten (10) centres around the country with highly motivated staff. While acknowledging that it had been a very fast and steep learning curve to take the programme off the ground, he appreciated that there was a growing demand of citizens for civic education and platforms to engage in discussions.

Further in the pride basket were the successful hand over of SPONGE Pilot Programme to the Government of Lesotho in November plus a good collaboration with important stakeholders in the country. Few of the stakeholders are Independent Electoral Commission (IEC), Ministry of Local Government and Chieftaincy, National Assembly, the Senate and other Society Organisation.

Sponge is a pilot project in which there has been a testing of new ways of protecting the wetlands and pastures in Mokhotlong district as a pilot site to pave way for Integrated Catchment Management (ICM). This is carried out by GIZ and its partners in the Department of Water and Department of Range.

In conclusion , Country Director officially announced a brand-new multi-country programme which is to start in January. The programme is intended to promote the Prevention of Violence Against Women and Girls in Southern Africa.  The project is titled Advancing Reporting and Accountability on Gender-Based Violence (GBV) in Lesotho through social media. It is intended to inform women about forms of abuse, their rights and services in regard to GBV. It is further to provide a safe space for women to share experiences and support each other. This will also help to strengthen women’s reporting of cases of GBV to centers and institutions dealing with GBV cases

He explained that the German government is supporting the efforts in Lesotho, South Africa and Zambia with a view of forming multi-stakeholder initiatives against GBV. As a sign of commitment of GIZ to the long-standing partnership with partners in Lesotho, GIZ has taken a decision to base this programme management in Lesotho and not in Pretoria.